Information Technology Investment Region (ITIR) project with an estimated investment potential of Rs. 2.19 lakh Crores and employment opportunity for nearly 68 lakh people in Hyderabad remains a non-starter because of deficient planning by TRS government in Telangana. Moreover, lack of initiative by TRS government to take up this mammoth project leaves behind a trail of unanswered questions.

The Government of India (GoI) pronounced ITIR policy to promote investments in ITES (IT Enabled Services) and EHM (Electronic Hardware Manufacture) in May 2008. As per the policy, state government would play the lead role in setting up of the ITIR. As of today, GoI has notified setting up of ITIRs near two cities – Bengaluru and Hyderabad.

While the earlier UPA government at the centre has given an official approval in 2013 for the development of Hyderabd ITIR – a self-contained integrated knowledge cluster for growth of IT and electronic hardware manufacturing in 50,000 acres in and around Hyderabad – till date the project hasn’t materialized. As per the plan, Hyderabad ITIR was to be developed in two phases: phase I of ITIR project was expected to be completed by 2018, while Phase II would be from 2018 to 2038. Development of ITIR required an internal infrastructure costing ₹ 13,000 Crores and external infrastructure costing about Rs. 5,000 Crores. 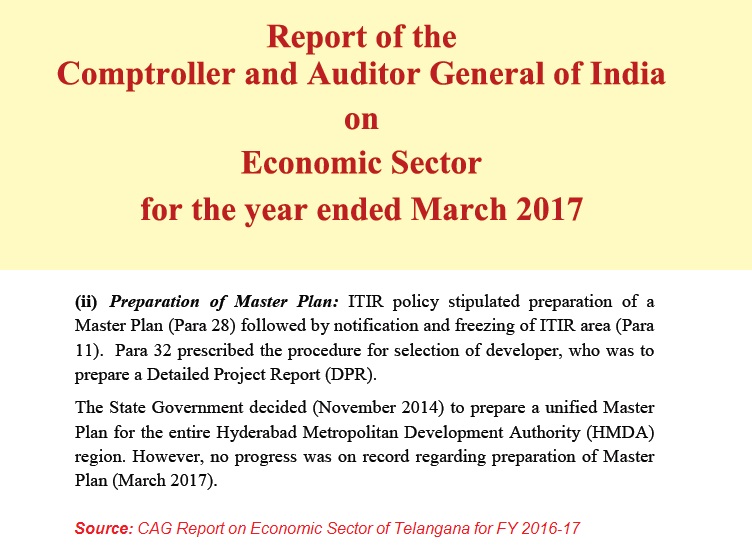 Moreover, CAG also observed that ITIR Development Authority was not constituted by TRS government and that “in the absence of an empowered functional authority, implementation of ITIR could not be initiated, despite lapse of three years after approval.” While the state government of Telangana contends that there was delay in implementation of projects by Government of India (GoI), CAG finds it unacceptable as the state government was supposed to play the lead role as per ITIR policy and anyway support from GoI was to be only ₹ 165 Crores out of total Rs. 4,518 Crores needed for infrastructure in Phase I.

What is ironic in this entire episode is the political blame game happening for the last three years while ITIR project is restricted to paperwork. With so much at stake, specially in terms of the employment potential of this massive project (68 lakh jobs) which can certainly help address Telangana’s unemployment woes (Telangana has 21% graduate unemployment rate and 4 lakh graduates who are unemployed and actively looking for job), TRS government seems to think its responsibility is over by pushing the blame to central government’s doorstep. 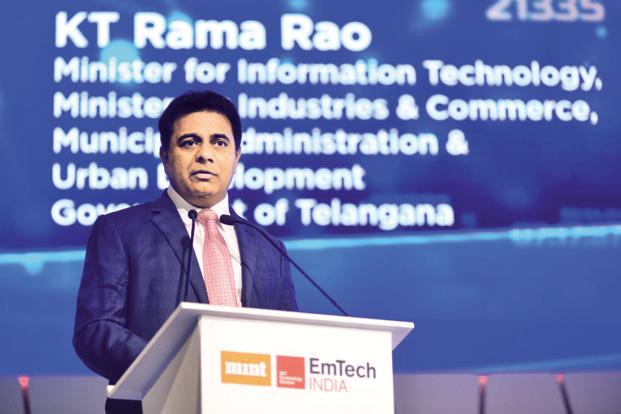 When criticism started mounting from all quarters including CAG, it appears as if TRS government is now pursuing the blame game just to avoid answering the reasons for rejigging the entire master plan of HMDA. Whether it is inefficiency or it be mala fide intentions of the TRS government, one thing is for certain that people of Telangana have been short-changed.