The cheerless case of jobless graduates in Telangana

A man willing to work, and unable to find work, is perhaps the saddest sight that fortune’s inequality exhibits under this sun. – Thomas Carlyle 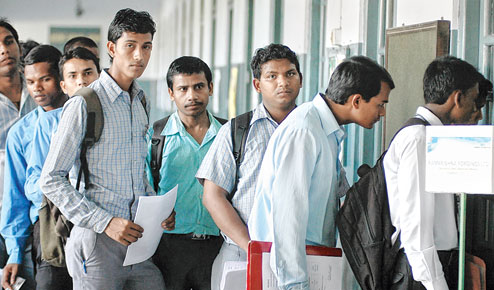 Let this sink in for a moment: A person is considered to be actively looking for a job if such a person has contacted potential employers / placement agencies for jobs, appeared for job interviews, responded to job advertisements, online employment sites and submitted resumes to potential employers. Reading about jobs or attending training programs is not considered as actively looking for a job.

Now realize the gravity of the situation: In Telangana, four lakh graduates are actively looking for a job and still unemployed. Or to put it in other words, one out of five graduates in Telangana is struggling hard to get a job by attending job interviews etc., but by end of the day comes home with battered shoes and shattered dreams.

Telangana is one of the top four states in India (except: J&K and North East) with unemployment for graduates above 20%. The other states with above 20% unemployment being Andhra Pradesh, Himachal Pradesh and Jharkand. On the other hand, Karnataka, with a competitive IT hub in Bangalore just like Hyderabad has a very enviable unemployment rate of 5% for its graduates. The national average unemployment rate for the graduates is 12%. (See table below) 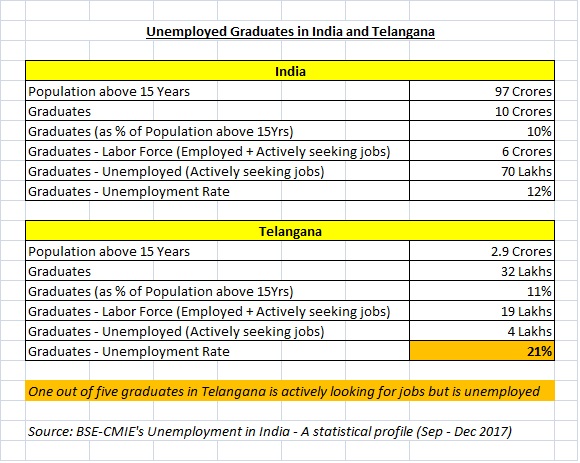 Karnataka and Telangana: A comparative study

Karnataka could be taken for comparative study to understand the ground realities in Telangana. Both states posit themselves as South Indian states with strong infrastructure and talent-base to attract the modern industry including Information Technology sector. Bangalore and to a lesser degree Hyderabad have become destinations for MNCs to invest. The GSDP per captia of both the states is also comparable. So, how is Telangana performing in terms of employment creation capabilities vis-a-vis Karnataka? 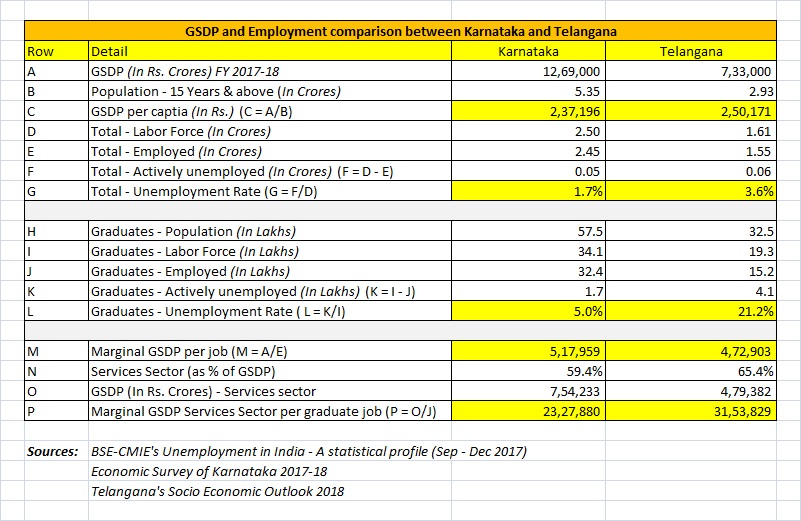 With broad assumptions of graduates venturing only into services sector and services sector solely dependent on graduates, if marginal GSDP Services Sector per graduate job created is calculated: for every extra graduate job to be created, the state’s output should increase by Rs. 8 Lakhs more in Telangana than in Karnataka. Or to put it another way, for every Rs. 100 output Karnataka produces, Telangana needs to produce an output of Rs. 135 (35% more) to generate similar graduate employment.

While Telangana boasts of 14% growth in GSDP in 2017-18, it appears to be a growth in output which is not translating considerably to growth in employment. With one out of five graduates on the street, it is high time Telangana moves away from jobless growth to equitable development, no matter the plethora of welfare schemes the government doles out.