“Nobody spends somebody else’s money as wisely as they spend their own.” – Milton Friedman

After years of struggle and sacrifices, Telangana became a reality in 2014. TRS got the public mandate and formed the first government of Telangana. It’s almost four years now since Telangana’s inception and when one takes a hard look at the finances of the youngest state of the country, a complete disarray of wrong priorities, populist schemes, financial mismanagement and creative accounting is witnessed.

Take for instance the outstanding debt of Telangana. It is projected to be Rs. 1.8 lakh Crores as per 2018-19 Budget Estimates. In addition to that, state government has already given another Rs. 42,000 Crores of guarantees on loans taken by state government’s public sector undertakings. As per the CAG’s (Comptroller and Auditor General) Report on Telangana state finances for 2016-17, the outstanding debt is so huge that one out of three rupees borrowed by government was spent on repaying the previous debt in 2016-17. As per Budget 2018-19, the interest burden itself for the year 2018-19 is expected to be Rs. 12,000 Crores. TRS regime in the last four years has unfortunately pushed Telangana into a debt trap. 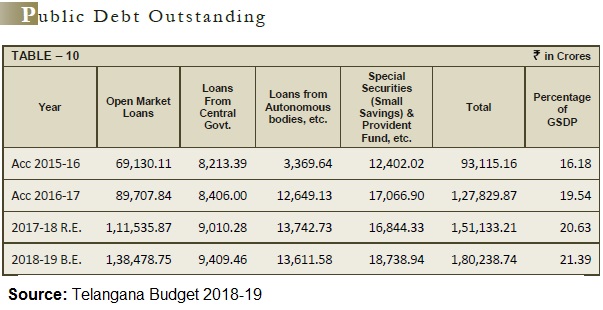 In a series of articles starting today, Kothapet Updates would take up various instances of fraud (accounting malpractices and fudging of data), false promises (tall promises and various populist schemes that  remain mostly unfulfilled) and fiscal imprudence (financial mismanagement and inefficiency) of TRS Government that led to presumptive loss of lakhs of jobs and crores of rupees in Telangana. We hope this endeavor of Kothapet Updates will help the people of Telangana understand the current state of affairs in Telangana.